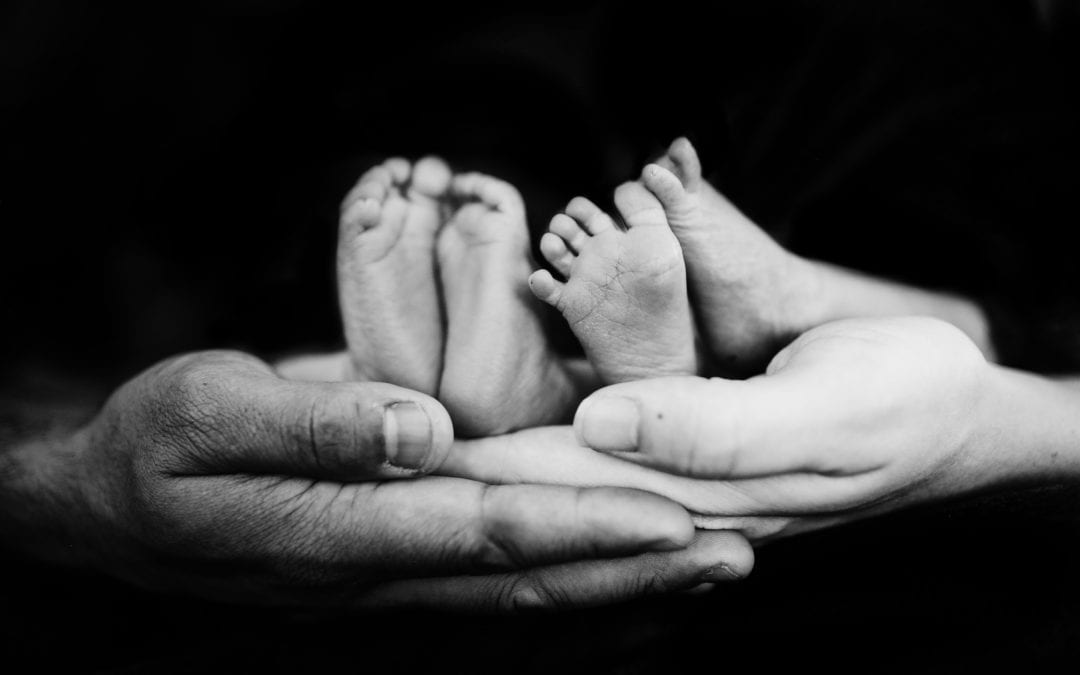 Our road to pregnancy was a long and emotional one. From the time I was old enough to babysit, I knew I wanted a big family. My two goals in life were: Get married. Have babies. I had it all mapped out perfectly- what age I would be when I had my first baby, and then keep having babies.

My husband, Jamelle, and I met in college. We dated for five years and married at the age of 27. About six months into marriage, we decided we’d ditch the protection and see what God might do! It was time!

What followed was an exercise in faith and learning the meaning of fully relying on God. I have four years worth of teardrop stained journal pages with written cries, prayers, and pleads for a baby. Month after month I’d sit in the bathroom at work and cry when I’d start my period in the middle of the day – yet another failed month. People often asked, “any plans for babies, Lauren?”. I’d blame my lack of children on my husband being a full-time student, and we wanted to wait until he graduated.

I don’t know if I believed it or if it was the only phrase that I could muster during those times of deep sorrow, but I kept telling myself – “God has a plan. God’s timing is perfect, and I have nothing if I don’t have trust and faith in God.” My belief in that statement ebbed and flowed. At times my whole heart believed it. At other times it sounded like a foreign language.

We finally decided to go see my doctor to figure out a medical plan of action. She discussed many possibilities that could be affecting my fertility, so she put me on Clomid and warned me there was a 12% chance of multiples.

After being ten days late, I decided it was time to take a test. I was excited, but still incredibly anxious about seeing another negative test. I remember thinking and praying, “God’s timing is perfect.”

There it was—the results.

Finally, it happened! For the first time, the words “pregnant” read across the test.

We told our families the next day, and there were screams, tears and hugs all around! My anxiety about getting pregnant had subsided, but I wanted to see a doctor as soon as possible. A family friend works at Insight Women’s Center, so we reached out to her, and set an appointment.

A Visit to Insight That Changed Everything

When I arrived at Insight, nurse Donna explained what I could expect during my appointment. She squirted cold goop onto my belly and started with an ultrasound. I quietly watched the screen while the wand moved around. Half way through the ultrasound, Donna stopped at what seemed to be alien eyes looking at me on the monitor. She said, “Ok! I wanted to be sure before I said anything, but do you see those two dark circles there with the two small white circles in the middle of them? Lauren, you’re pregnant with twins!! Congratulations!!!”

Every ounce of me wanted to scream, cry, and jump right off that table, but instead, I very calmly said, “Oh wow, oh my gosh, that’s amazing!”

I can’t describe the emotions that came over me at that moment. Four years of praying, trusting, and crying out to God to give us a baby! Four years of hoping and telling myself over and over – God has a plan, His timing is perfect. This exact moment was His plan and His perfect timing.

After the ultrasound was complete, Donna helped me learn about a new and healthier lifestyle that I’d need to begin to keep these babies safe and healthy. Jamelle wasn’t able to be with me that day, so she asked if I wanted to call him and tell him the big news! She sat with me with a huge smile on her face. He asked, “Everything good?” I answered yes, and then followed it with, “well babe, she found two heartbeats.”

“You’re lying! You’re not serious! Oh my gosh, are you serious?”

I was over-the-moon excited! Jamelle, I think, was terrified. The following several months, he would mumble “12 percent” under his breath.

We later found out that we were having one of each- a boy and a girl! Brooklyn Hazel Indira and Jamelle Thomas Jr. were born at 38 weeks. They were tiny, beautiful, and God’s blessing to our lives.

I’ll never forget and will be forever grateful to Insight Women’s Center for officially introducing me to my sweet babies and launching me into our time;